The mining station is located randomly in Lavaland. The shuttle is the lifeline between the main station and lavaland and is the primary workplace for the brave Shaft Miners. The shuttle contains a crate for processed minerals and an ore crate. It can also carry megafauna from the mining base to the station, so be careful not to run into the shuttle with one chasing after you.

The mining station is the largest and only official Nanotrasen established base on the planet known as lavaland and is roughly split into living quarters, ore processing and EVA. As the mining station exists on a different Z-level from the station, it is often used as a place of exile for Heads of Staff and Head Revolutionaries. It is also spared annihilation in case of a nuclear explosion or self-destruct. The mining station is often a hive of scum and villainy, due to the various inhabitants and isolated nature of lavaland.

What Happened to the Asteroid

The mining station wasn't always based on lavaland. Long ago, Nanotrasen had secured a plentiful supply of plasma on various asteroids, but that supply ran out years ago. So, after exhausting all the hostile wildlife minerals on the asteroid, Nanotrasen scoured space around the station for a new source for that sweet, sweet plasma. Luckily for you they found a young planet with a huge variety of minerals - most importantly plasma. Unluckily for you the planet is almost completely covered in lava, a host of deadly creatures and ash storms. 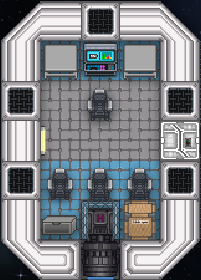 The mining shuttle is the only way to access Lavaland and can be found at the end of Mining in most Cargos. It can be called with a mining shuttle console, which both the Space Station and Mining Station have. Miners use it to transfer both themselves and ore crates back and forth between the stations.

The shuttle works like any other shuttle and will gib anything in the path of it's landing. It should be noted however that the shuttle can be operated by anyone and it's the only connection between the stations, making access to it extremely lucrative among ne'er do wells and other vagrants looking to use their ghost role as a free respawn (Granted, they will be stuck in the mining airlock since mining access is required to enter Cargo). For those daring enough to try, Megafauna can be coaxed into the shuttle with enough patience (and a rolling chair with a corpse in it) and brought onto the station to wreck havoc. It's a reckless thing to do that won't really accomplish much in the way of objectives, but its a fun gag to pull.

The mining base is the part of the mining station that contains most of what you need. East of where the shuttle lands is a console to control it, a crate and a water tank. There are more crates to the south.

The E.V.A. room is the first place of any miner as it contains all the necessary equipment to make mining a success:

The infirmary is home of the Mining Medic and is stocked with enough medical items to to fix the damage you might incur while exploring Lavaland. It contains IV drips and blood packs, a sleeper, an ATV and some consoles. There are morgue trays for the unfortunate few who don't make it back in time, and a surgical area to fix anything that cannot be cured by normal means or implant organs to make the miner's job much easier.

This is the more rarely used side of the Mining Station.

Before the Ore Redemption Machine existed, miners smelted their minerals using this set of machines. In case you need to use them, they work by putting an ore crate on the top right, on the input of ore loader. This machine will grab ores from the crate and put them on the conveyor belt, which will feed them to a smelter. Interacting with the console will let you choose which ores to smelt; do not smelt two different ores at the same time unless you want slag to come out (or plasteel in the case of plasma and iron). The resulting minerals will be carried out by the conveyor belt, on the bottom side of the room.

The coin press in the mining station storage room can be used to manufacture coins from any kind of mineral.

The machine inside this room is the only thing that allows you to hear and speak on the station's radio channels. If it is disabled or destroyed it'll cut off all radio communications in Lavaland.

Here you can find two lockers full of mining equipment, useful for those who become miners through the HoP. This room also contains some ore boxes, a washing machine and an equipment vendor.

The kitchen has some food in the form of donk pockets and a vending machine, plus loads of beer. The bedrooms aren't particularly useful, which makes them great for hiding contraband or cult runes. There are showers located south-east of the bedrooms.

This room contains the power and air supply of the mining base. Additionally, it starts with a locked crate which contains random loot.