What is a Xenomorph?

Aliens, also known as Xenomorphs to differentiate them from the general term, are extraterrestrial lifeforms that use other living beings as a host during their life cycle. With black carapaces and wicked sharp claws, powerful night vision and the ability to see people through walls, xenomorphs are extremely dangerous. They are intelligent and capable of speaking to one another via a hivemind. In comparison to Earth species, xenomorphs are closest to parasitic wasps that live in colonies with queens and require another lifeform to gestate inside.

Xenomorphs start life as an egg laid by a queen. This egg takes five minutes to develop, at which point it will automatically hatch. Xenomorphs are all female, but still reproduce asexually. Queens can lay eggs, but these eggs cannot develop into adults on their own. In order to get the other half of their genetic code they implant embryos within other life forms and use their DNA. From the egg, the next stage will emerge, called a facehugger.

The facehugger is not a true xenomorph, instead it carries half of its mother's genetic code (all dominant genes) and is used to more or less mate with other living creatures, usually humans. The facehuggers can be placed onto the face of a human or if called will jump on their own. All pets except Ian are too small to support an embryo and so they cannot be implanted. The facehugger will leave the embryo inside the stomach of a host, and then fall off and die.

Inside the host, the embryo copies part of its DNA, then begins growing. Eventually it will become too large to live inside its host any longer and burst out of their body, killing them. The larval stage of the xenomorph is aptly named "chestburster."

The larval xenomorph is weak and must be allowed to grow before it can fight. It must uses its abilities to hide from anything that could do it harm. Growing up takes approximately seven and a half minutes, but this can be accelerated when in the presence of alien resin. The chestburster can then shed its skin and become an adult, either a drone, hunter, or sentinel.

The xenomorphs who become drones must store up 500 plasma, at which point they can evolve into queens and start laying eggs on their own.

In addition, there is also the Alien Empress; a huge xenomorph spawned for the sake of shenanigans by admins. It is unknown whether this will be implemented as another evolution stage in the future.

The only type of alien not controlled by a player, it is a parasitic cycle in xenomorph production with the appearance of two human hands held together and attached to a spiny, powerful tail. It has a proboscis it uses to implant embryos and provide oxygen while strangling a victim. The finger-like appendages are used to attach itself firmly to a host body when they are in a single tile proximity. Once implantation is complete, the facehugger falls off and dies. Very few items are capable of resisting a Facehuggers attack, typically only top-tier military, riot or viral equipment will stop it, otherwise most masks or helmets be easily torn off. Like all of the xenomorph species, not much is understood about its growth, motivations, or senses, but it is known that a facehugger can tell the difference between a living humanoid and a non-living humanoid such as corpses or cyborgs and that they are suicidally focused on reproduction. Xenomorphs often use crowds of facehuggers to take down large prey or grouped or well-defended humans.

Also known as chestbursters because of their method of exodus from the host body, larval xenomorphs are the third known stage in reproduction for that species. While developing in the body, xenomorph embryos attach to blood vessels to absorb nutrients and complete its unstable genetic structure using the host's DNA. Through an unknown process, this always results in a functioning offspring. This form is small compared to the adult, limbless and serpentine. They have a strong instinct to hide after forcing their way out through the ribcage and violently tearing their host body apart. If left alone, xenomorph larva will undergo an unknown transformation process to adulthood. It is believed at this stage that the xenomorph is at its most vulnerable due to its small size and apparent lack of many senses, though this should not be misunderstood -- a larva is still deadly. Its powerful thrashing and sharp teeth got it out of a human sternum, after all.

These form are usually the last in any given xenomorph's life cycle. There are many variants of the adult xenomorph, but the Hunter is the most commonly seen on stations for obvious reasons. The Hunter sports a phallic-shaped skull with hidden, mostly useless eyes protected by a one-way transparent dome. The Drone has a broad skull, no back-spikes, and a lanky physique. The Sentinel is a hulking beast with sacs of acid on its throad and a shit-ton of muscle. All three have a host of esoteric senses, most prominently a theorized echolocation (explaining their near-constant hissing) and electroreception, though their primary sense appears to be smell. The scent of pheromones is experimentally shown to be the primary communication device of xenomorphs, most effectively transmitted by the ropey purple weeds the adults spread around the station. It is unknown where this tissue comes from, as xenomorphs refuse to make it in captivity. The primary byproduct of this weed is the strange substance plasma and as such most corporations are extremely interested in the connection between the xenomorphs and that chemical for production reasons. Like the facehugger, the xenomorph's blood is highly acidic, and there are rumors that it is capable of eating even through space station hulls, though it must be said that this is only a rumor.

The adult xenomorph is a living weapon, with an exoskeleton thick enough to absorb or redirect most trauma and temperature extremes, scythe-like claws, and a multi-tiered jaw system capable of projecting an acidic compound presumingly from their stomachs. Xenomorphs at this stage show semi-sapience and problem-solving abilities, and are capable of using pack-oriented tactics, creative stealth, and psychological manipulation. It is reported that xenomorphs may be able to communicate in a basic way with sentient species, but there is little evidence to lend credence to such an absurd notion.

The Praetorian is the next step of evolution for Drones. These xenomorphs are known to be substantially larger than the other castes, and are thought to be bodyguards for the Queen.

When the Praetorian has aged enough it will eventually evolve into a Queen Xenomorph. They are the only xenomorphs capable of laying the eggs that hatch facehuggers. While much larger and tougher than other adult xenomorphs, they are quite a bit slower. Even accounting for the size difference, a xenomorph queen can take drastically more punishment. A queen is most likely found where there are high levels of plasma, surrounded by hunters and swarms of freshly hatched facehuggers. They are significantly more intelligent and highly protective of their offspring. While slow, they have quite a few weapons at their disposal, a larger, thicker crest to protect their brain casing, and higher internal stores of plasma which they can utilize for the shaping of resin, the laying of eggs, and destructive survival defenses. Like all xenomorphs, there is little information about them. 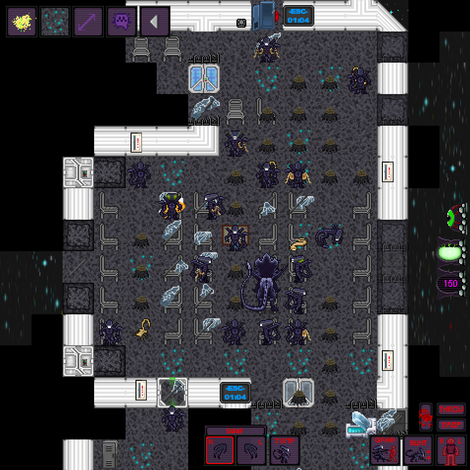 A lot of people like aliens, either playing as, fighting against, or being stroked by them. Fortunately for those of us who do, random alien events and/or answered prayers tend to happen very frequently. Unfortunately, however, it seems a lot of people have no fucking clue what they're doing when they spawn as one. This is a guide describing some basics and tips about playing as a xeno so you're not stuck in ooc going "how does I play alium?"

This guide is fairly comprehensive and long. There is no tl;dr for this shit, so tough it out, soldier.

Aliens arrive on the station in one of three ways.

The first way is for the random event where CentCom broadcasts that an Unidentified Lifesign has been detected aboard the station. This means that a larva as spawned in a random vent. The second way is for admins to spawn them. This can either be as a forced random event that is exactly like the CentCom alert, OR they could just hide some facehuggers and/or eggs somewhere on the station while they cackle evilly to themselves waiting for some poor unsuspecting assistant to get a very slimy face full of alien wing wang.

The third way is for mining to discover a facehugger on Lavaland and transport it to the station, usually to xenobiology, for "study."

"Shit, my face has been raped by xenos." If you've been infected, there will usually be telltale signs. You'll feel sick. Your throat will be sore. You'll cough a lot. These symptoms mean you are forming a babby. Luckily, medbay is capable of surgically removing alien embryos. Making a backup in genetics then cloning you once you burst (or after your infected body is burned) also works, provided you can get the geneticists to stop dicking around for thirty seconds.

If there's anyone around when you burst, you may be fucked. Turn on Yakety Sax and run for your life. Finding a vent is your best, and probably only chance of survival.

You can spam crawl through vents faster than anyone is going to react to your presence, so don't be afraid to scout out as many locations as you can to figure out the best place to hide.

As you develop (after bursting, of course) you will change colour. freshly hatched larva look like

There are currently 5 classes past larva stage: Hunters, Sentinels, Drones and Praetorians. Drones are the only aliens that can evolve again into a Queen. Hunters hunt, Sentinels guard, Drones build a nest, and Praetorians guard the Queen. All classes can literally eat people and digest them by aggressive grabbing their victim and clicking on themself. After devouring they can drop them by using the regurgitate button.

Sentinels: The Guard of the Hive

You are a Praetorian, the last step in evolution before the alien queen. Drones may only evolve into a Praetorian if there are no other royals present. Queens can promote a Praetorian, if one does not exist.

Praetorians have a similar set of skills to alien queens, minus the egg laying: Neurotoxic Spit, Tail Sweep, Corrosive Acid, Shaping Resin. Praetorians cannot ventcrawl, but are also immune to stuns and very hard to kill.

I'm a queen, but how is babby formed?

Common Mistakes as an Alien Queen: 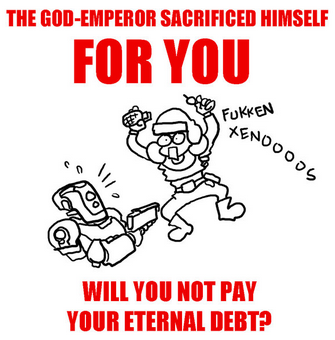 Oh shit it told us to weld the vents what now?!

But we're all hopelessly stupid and incompetent. The aliens are everywhere! What now?

Everyone is dead but me! What do?

Tips for Fighting Against Xenos