As head of Security, it is your responsibility to watch over the Brig, Bridge, and Courtroom areas and ensure Security Officers don't ruin everything. Your job isn't to hunt people down unless it's an urgent matter in one of the many places your ordinary security officers can't get into, so you can usually sit in your office and let the securitrons and redshirts do it for you. You have more access to the station than anyone else in Security but less than the other heads. Try not to depend on it.

IMPORTANT: Aside from the captain and Head of Personnel, you are the highest in the chain of command on the station. Be aware of the responsibilities this might entail.

Bare minimum requirements: Try to keep your team alive, working together, communicating, concentrating on the bigger fish rather than small leeches, and not devolve into shitcurity.

You are concerned with the following people: 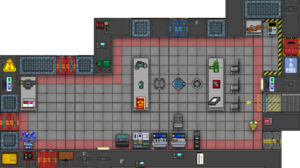 Your office is in the main Security Office, complete with posh carpeting

Each officer is given an assignment when they join the game. Most will be assigned to guard one of the four major departments (Medbay, Research, Engineering, and Supply). Department guards are given a small security office and limited access and can use that department's radio channel. Department guards are also marked with color-coded armbands. It is your job to make sure a member of security staff each department. If a department becomes a hotspot for criminal activity, it may be a good idea to reallocate more men to that department.

Your office is in the Security Office and holds several weapons, devices, a recharger, and both types of security terminals.

Contents of the office include the precious multiphase energy gun, a stun baton, a riot shield, mindshield implants, and many stylish alt outfits to wear as well as a host of miscellaneous materials ranging from loudspeakers to remote door controls, depending on how generous central command is.

As the Head of Security, one of the main assets for space travel is your hardsuit. This has much better protection than the regular suit you have on, but at the same time, it slows you down. Locked inside of the same suit storage is a pair of robust combat magboots - which will still slow you down - but are more agile than regular ones.

The holding area for prisoners. Security personnel, Heads of Staff, and the Lawyer have access to the hallway, but only Security personnel can use the cell controls. It's still possible for regular crew members to view the cells through the windows behind them. As the windows are electrified, they're not a reasonable means of entry unless the person has insulated gloves.

Prisoners always try to flee, so do something about the doors (portable flasher), or handcuff them to the bed as you investigate their items (make sure to release them if they aren't super dangerous). And SET A GOD DAMN TIME TO THE TIMER -- it won't lock the door unless you do this. Remember that some prisoners may have a toolbelt or insulated gloves; thus, a means to escape if left unsupervised. Remember to remove possible weapons unless you want a nasty surprise, but you already knew that, right?

If you wish to execute someone, take them to the bottom of the prison hallway, and you will find a short tunnel taking you to the transfer center. This area is "unknown" to silicons, where humans are regularly put to waste. This room comes equipt with lethal injections, an n2o canister, and tools to make an electric chair.

You're My Favourite Deputy

You're occasionally almost always going to get an understaffed (or absent) department staff. This is going to pose a problem, especially during times of crisis. Luckily you can deputize the crew's volunteering members without having to make them full officers.

Your office has a computer which can hand out security access. Make sure you understand the risks you take whenever you do this. Also, make sure that deputies receive their armbands.