Effectively, you are an assistant on steroids, and need not fear any electrical things with your gloves. You can, however, affect the station, for good or for ill, much more profoundly than a mere assistant can. For example, badass engineers can break into the teleporter room quickly to kill a malevolent AI.

Bare minimum requirements: Fix hull breaches, fix the power grid if power goes out in an area. And for the love of Nar-Sie, don't just run off with the damn space suits before the engine is set up!

Take a look around engineering as the first thing you do, and see how many fellow engineers you have. If there's a ton, you probably don't want to snatch up everything that isn't nailed down. Don't fight over hardsuits. Don't try to break into the middle of a task someone has already begun: trying to fill plasma tanks at the same time as another person usually ends up filling engineering with plasma, and trying to turn on containment at the same time as someone is often lethal.

Be nice and courteous and you'll often be treated well, curse people out for their incompetence or how slow they are and people aren't going to rush to your retrieve your corpse when syndicates blow your head off on the solars.

Engineers have to carry a lot of equipment to perform their various tasks. The job is a lot easier if you carry around what you need, so you don't constantly have to be running back to engineering for each step of a repair process.

Here's a suggestion how you can be prepared for shit on the space station:

This is an image of the tools every engineer should be trusted to have on him at all times. Empty pockets can be used for tools, flashlights, etc

And if you're planning to go fix stuff in space

Some of this you start with, some you need to collect. The items you pick up are:

Firesuits can no longer be carried in bags, and it's unsafe to firefight without them, so just run to the nearest firefighter closet in the advent of a fire to gear up. There is one close to nearly everything in the station. Learn its locations.

Note that some of these are for roleplay reasons only. Roleplaying also determines whether you're a good engineer or not. --When talking with people face-to-face, take the helmet off and carry it around a little bit -- hardsuits look pretty cool without the helmet on.Write down things you figure out like the door wires and photocopy them, distribute them to the other engineering staff as a memo. Engineers have some exceptional roleplay as the people that fix everything when everything else is going to hell. Take advantage of that camaraderie and the ludicrous nature of the situations you will find yourself in. A robotic mute-guy-fixing-everything playing style is efficient, of course, but it isn't nearly as fun for everyone. 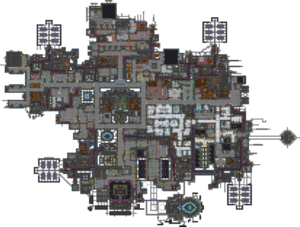 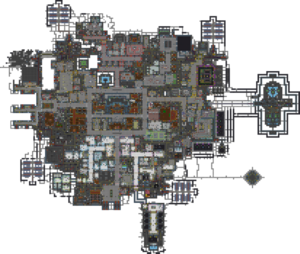 As an engineer, you're sometimes called to put the station back together again after a bad fall. Sometimes, that's a problem, because what used to have an identifiable shape now is just a mess of shattered tiles, exposed space, and broken dreams.

These maps highlight the crucial bits of machinery running under everything so you can fix any section that gets broken. It is also useful when the power goes out in a section to figure out where the damn clown cut a cable.

You have a few things you should do if you don't want to be robusted, before doing what you want to do. Repairing things is what engineers do, and so is setting the station with power. Without any engineers doing a little work, the station will crumble.

This is an essential task. Luckily, it is laughably simple. Make sure you follow the instructions precisely; an engineer who accidentally sets the singularity free is not a popular person.

Starting That Other Engine

Some Chief Engineers prefer to use the tesla engine over the singularity engine. The same precautions apply.

Sometimes there's a Supermatter instead of a Singularity/Tesla engine, it takes a few more steps to set up, and only your department will hate you if you mess it up.

Working on the Solars

Read the guide, make sure you have wire, internals, and a spacesuit. Best of luck.

Is there a hole in the wall? Are floor tiles broken? Did an idiot break a window to get into the medbay? Are people complaining about electrified doors? Are cables torn up leading to an APC? Are the APC's themselves fried? Is it more than thirty seconds into the round? The answer to two or more of these is always yes.

Quit reading "The Lusty Xenomorph Maid" and get to work!

The main engine or the solar panels provide more than enough energy to fully power a state-of-the-art space station -- unless something goes wrong, which it almost always will. Whether it's due to shoddy wiring, a powersink, a bomb, an assistant cutting cables, a loose singularity or pure engineer laziness, power outages are a common problem that is your, YES, YOUR, job to fix. See that Power Monitoring computer? If people complain of power outages, it should always be the first port of call -- assuming the rampaging maw of Lord Singuloth hasn't already devoured it.

See the guide to power to learn how to into power and, more importantly, how to fix everything.

Getting the Man Out of Danger... Alive!

It's your job to save lives when they cry out for help.

Engineers get access to maintenance hallways, which contain several firesuits and extinguishers. If a fire breaks out somewhere, put it out. Firesuits allow you to walk in almost any fire. Extinguishers have a limited capacity. Refill them with water tanks, which can be found all around the station.

If someone cries that he can't get out of somewhere and no one can get him out, then it's your job to do so. Hacking airlocks, deconstructing walls, basically whatever it takes to get to them. I don't need to point out that you should never put others at risk in doing so!

Being a traitor engineer can be both the easiest and hardest task on the station. On the one hand, you can go almost everywhere on the station and have easy access to the tools to get rid of any pesky doors (or walls) in your way. Also, many crew members don't bat an eyelid when they see an engineer wearing a jetpack, or standing in a hole in the wall. Any curious crewmen are usually deflected by saying you are doing engineering work ("I need this to repair hull damage, Captain!")

On the other hand, Engineers lack weapons. Stungloves, however, are the hidden weapon few ever search for, which can give the upper hand in a fight. Stungloves are gone forever, but stun prods can be made from basic tools! Also, cable restraints may be constructed from cable coils. In a pinch, the welding tool is a reasonably powerful weapon that causes burn damage when turned on. Secondly, engineers loitering near their target may quickly arouse suspicion, especially if you are far away from a maintenance tunnel. Engineers are also one of the few jobs which retain their maintenance access, making travel around the station significantly safer, faster, and easier.

And finally, if you genuinely hate the station, it is within your grasp to release the kraken singularity and generally sabotage the station's power supply.