The Thermo-electric generator gets its power from the thermal difference of the two pipes going through it. 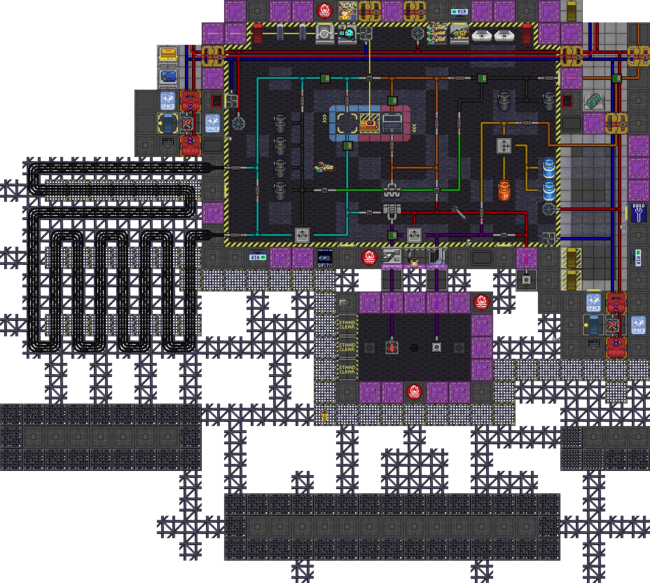 How to Set Up the TEG

The TEG is setup but it needs a little bit of attention to ensure the hot loop is functioning correctly.

In general, the SMESs don't need maintenance. However, there are a few times when they do need to be handled specially, namely during the following instances.

The SMESs are fully charged. They might as well be ramped up to full output. But it doesn't hurt to keep them at lower levels.
The Backup SMESs are charging. In this case, the SMESs will need to be ramped up to full output so that the Backups can charge faster.
The AI is rogue. Cut all power. The AI's greatest ally is electricity. Take it away. Note that the APCs' batteries will still power the station for a bit.
There is a power sink on the ship. Ensure output levels are lower than input levels, but not completely off. This keeps the power sink from draining the SMESs. You can use some clever electrician tricks to find the power sink through the power lines as long as there is still output from the SMESs.

Should they ever remember to, an RnD Scientist might want to upgrade the SMESs. Make sure they upgrade the SMESs one at a time, as upgrading them will result in all of the stored power being lost.

Answer: Keep calm, follow step one, make sure the TEG parts are rotated so the marked indent is facing the core, and that the left side circulator is set to cold with a multitool.

The TEG isn't making any power!

Answer: Look to see what's lighting up on the TEG, the TEG will tell you what's working and what's not, if the cold loop isn't working it will be dark, if it is working it will be a radiant blue. The same is true for the hot, but the colour will be red.

The cold side isn't lit up!

Answer: Check each pipe section with an analyser, see that each pipe section has gas inside of it, follow the pipes around with the pumps, one will be off or there is a break in the pipe. if the space loop has gas on one end but not on the other, go into space and check for damage to the heat pipes.

The cold side is not bright blue!

Answer: Check all the pumps are on maximum pressure, this indicates there's a flow but its not an effective flow, so there is likely a pump not pushing at all its capacity.

The hot side isn't lit up!

The hot side is not bright red!

Answer: This indicates something is throttling the heat, check that the burn chamber gas cycle is functioning, check that the hot loop pumps are all at maximum pressure.

Neither side is lit up!

Answer: It is possible that you set the TEG's cold and hot loops on the wrong side, if true there should have been a short time of a loop indicating some flow before completey stopping, check inside the TEG's display that the cold loop is indeed cold and not hot. If the loops are the wrong way around, un-wrench the TEG apart, open both circulators with a screwdriver, and multitool both circulators, screwdriver both circulators closed then wrench it back together.

Unfortunately for filthy traitors, the TEG is a safe engine, however that doesn't mean you cannot stop it from producing power.

There are many other creative ways to mess around with the TEG, just take care to not violate the murder bone rules, whilst a TEG won't explode its high-end damage is station ending, more so than that of a loose tesla or singularity.