The Supermatter engine is the main engine and power source in most station maps. It emits tons of radiation, making everyone who could theoretically see it hallucinate, releases hot oxygen and plasma, heating the air around. This engine can potentially explode, or even create a singularity/tesla if you screw up! When the shift begins it is dormant but if hit by an object, projectile or person it will activate and start producing huge amounts of radiation, which can be converted to power with the radiation collectors.

This is the engine setup used on most maps. The layout and amount of work required may change depending on the map.

This is the safest, easiest setup and it will be the most common one used. Don't experiment with the engine until you are experienced. This setup should last for the entire round. 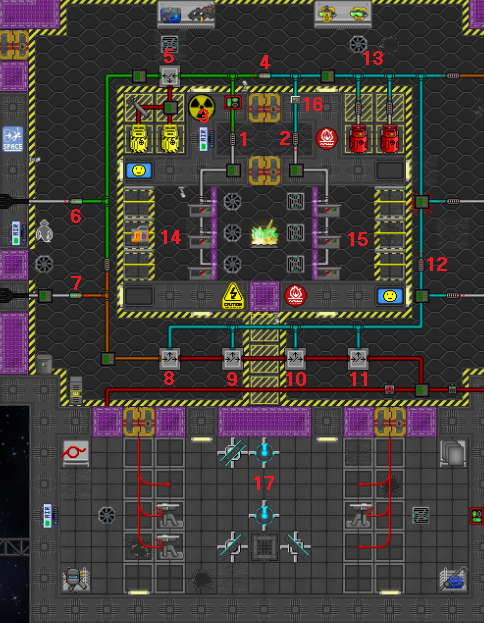 The engine will begin to cause both radiation damage and hallucinations once turned on. This will help you prepare for all of this.

Setting up the supermatter engine is a case of going in a big circle. Refer to the image on the right for steps 2, 3 and 4.

The final preparation is setting up the radiation collectors.

All the preparations to ensure the supermatter shard doesn't blow are now complete. Congratulations!

The supermatter is an extremely unstable crystal with particular properties. Here's how it behaves:

The crystal's power determines how much energy is produced each tick, and also the range and amount of radiation and hallucinations generated. (a 'tick' usually takes around 1-5 seconds depending on lag)

The crystal must be kept stable if you don't want it to explode.

Halon does everything that N2 does, but better, reducing the heat and waste of the supermatter crystal significantly. Also actively prevents fires from forming, while hypernobilium doesn't.

Hypernoblium, while it already freezes most gas reactions in the loop and in the supermatter chamber itself, also massively increases the heat resistance of the supermatter, allowing for very high temperatures that won't destabilize the crystal.

N2 is a good safety gas. It actively lowers the temperature and the amount of waste gases that the supermatter crystal produces.
Precooled N2 is good to have around for emergencies.

N2O reinforces the heat resistance of the supermatter crystal, allowing for much hotter setups than usual.

Healium, while it doesn't actively interfere with the supermatter's heat or heat resistance, makes the supermatter regain stability five times as fast.

Pluoxium is like N2O, but even more effective at raising the heat resistance of the supermatter crystal. When in high amounts and in conjunction with Nitrogen or N2O, results in a very safe setup. The method by which it is made however, requires the use of carbon dioxide which is inherently dangerous. Can be synthesized outside of the engine room and pumped in to ensure safety, but can also be bred in-situ.

Oxygen is the gas with the best power/danger ratio. It provides a boost to power transmission without actively increasing the waste gas amount or temperature.
Pretty risky to use, as any disruption of the cooling loop will soon cause a tritium fire in the crystal chamber which is nigh impossible to stop unless if the setup accounts for it to begin with. Even just a high concentration of O2 will activate and continuously power the crystal. This gas is almost as risky as CO2: it doesn't cause significant danger as long as the crystal is cooled, but the moment it ignites you are definitely fucked, moreso than CO2.
If you're badass enough to run an O2 setup: Always precool it before flooding the Supermatter chamber.

CO2 is a very dangerous gas - in low concentrations, it will increase the crystal's power generation and can be used to produce Pluoxium as well.
In high concentrations however, it will raise the crystal's energy to extremely high levels. This causes catastrophic side effects (electric arcs and anomalies) until it eventually explodes into a Tesla ball.
Only for the skilled.

Plasma is very similar to Oxygen but provides a much higher power boost as well as waste and heat penalty. The extreme pressures and volumes of gas produced by this gas are very likely to clog pipes.
WARNING: The roundstart setup can not handle pure plasma setups.

Provide the highest boost to power transmission out of any gas while not increasing the waste gas amount or temperature. However will very quickly be consumed by the SM to emit radballs.

Has 50 times the energy penalty of CO2, but is constrained by supply. If in high enough concentrations, it will cause the emission of radballs from the SM.
Only for the very skilled.

Has such a high heat penalty it sets the SM on fire and will burn so hot it will clog the scrubbers. Massively increases the energy output and is the best gas for high powered setups, IF you can handle it.
Only for those completely confident in their skills.

Zauker increases the damage ticks dealt to the supermatter by up to ten times the normal integrity dealt. Offers zero benefits beyond accelerating the process of delamination.

The crystal produces plasma and oxygen while it's active.

The crystal will affect nearby mobs while it's active.

Anything that touches the crystal will be consumed and turned into dust. No exceptions, not even other supermatter shards. The only way to "safely" transport a shard is to pull it, being careful to not be pushed back into it by someone else.

Troubleshooting AKA Oh god it's on fire what do I do!?

The supermatter's in trouble! You should be able to locate where the issue is from the screenshot alone. Here's the answer.

If the supermatter is on loudmode and declaring the corruption of the support infrastructure on comms, it has been seeded with antinoblium by a traitor. There is no hope of fixing it unless you have a precooled canister of hypernoblium available on hand. In all other cases, immediately call the shuttle. You can delay the delamination with a very robust plasmacooled pluoxium breeder based setup if you can SCRAM the chamber before the EMPs hit, but it won't be saved.

Inspect the gas loop to confirm it is intact and operational.
Check the

meters to quickly ascertain where a problem may lie.
If any of the meters report an unusually high or low amount of gas, then you're close to finding the issue!

If the gas temperature is too high to stabilize with the cooling loop alone - hope that Atmos have a canister of precooled N2 or even Hyper-Noblium around.

If the supermatter is delaminating and the gas loop is operational, use an

analyzer to check for problem gases in the loop. Someone may have slipped in some carbon dioxide. Double-check the filters to see if they're getting rid of unwanted gases.

If all else failed, pray that an Atmosian elder investigates and finds the problem before it's too late.

Want to sabotage the crystal but can't figure out how to pull it off? Here are some pointers and hints:

These are the easiest to pull off and require no special conditions. You'll want to keep the supermatter chamber very hot and full of plasma or CO2.

This kind of delamination requires careful gas management but is faster, far more destructive and there's a good chance it will irridiate, burn and shock the engineers who are trying to fix it.

This is by far the most difficult but also the simplest one.

This form of delamination is the easiest way to get a guaranteed delamination, but is very expensive as it requires a single use 10TC traitor kit which can only be purchased on hijack or martyr. A supermatter crystal seeded with an antinoblium shard and corruptor has its control and support structure corrupted, causing its system to slowly fail and eventually cause a delamination. This form of delamination also doubles the explosion size of the supermatter and causes it to release multiple EMP waves that are sure to hit the SMES rooms and the station as a whole. Very, very devastating, but takes time and is extremely risky, can also double as a ghetto powersink thanks to the EMP waves.