As a chaplain you would ideally proselytize whatever crazy religion you've made up for that round over your headset. However, besides your office, the hellish crematorium next to it, the theater backstage, and the rarely used morgue, you have no access.

Bare minimum requirements: Know how to deal with the various supernatural threats that afflict the station, and have something to do when there aren't any. 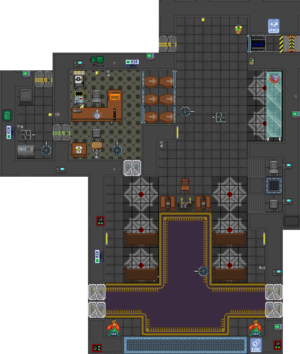 Arguably the most important tool in your arsenal is your bible. It may be named differently depending on your religion, but for the sake of this page, it will be referred to as a bible. Certain religion names will give you a custom bible name. For example, setting your religion to Hinduism will name it "The Vedas", while setting it to Christianity will name it "The Holy Bible". Otherwise, it is simply titled "The Holy Book of [Religion]".

When you interact with it directly, you will be first prompted to select a skin from ones available. They are purely cosmetic, so feel free to choose whichever you like the most. After this, you will be able to access the inside storage compartment of the bible, which holds a bottle of whiskey. You can put almost anything else in there, however.

Hitting somebody in the head with your bible will heal 10 points of brute and burn damage on organic limbs (robotic limbs are refused to be healed) while dealing 5 points of brain damage to them, up to a total of 60 brain damage. However, this can change depending on your selected sect: see Altar of Gods below. Note that the bible can't be used by non-chaplains, sizzling in their hands if they try to do so. However, they can still access the contents of the bible itself.

The second most important tool in your arsenal, the null rod can be a fair variety of weaponry that makes you immune against direct Nar'Sian and Ratvarian magic, and certain Wizard spells as well as heretic mansus. However, it usually can't stop a sword.

The armaments beacon can be found in the ChapDrobe. When you use it, you will be presented with six options:

Attacking it with your bible will allow you to choose a sect. Currently, there are six: (Favor represents how much/what type of materials you need for 1 Favor.)

Every chaplain needs their own religion. While you can use one that already exists, whether it's something real like Christianity or Zoroastrianism or one unique to SS13 like Ratvarianism or the Cult of the Honkmother, sometimes it's fun to come up with your own.

Below are some questions to consider. They are by no means wholly-encompassing, but thinking about these should give you a solid base for further development and hold up to questioning; perhaps write these answers down somewhere, if you want to keep them consistent.

Individual chaplains are free to invent their own specific rituals, but there are some matters shared across all types of chaplain, such as:

Ringing Up the Gods

The Pray command, like an Adminhelp, contacts all of the currently-online admins. However, it is treated as IC, and should be worded differently as a result. More specifically, avoid asking for specific items or equipment. For example, "can i have an rcd", even with proper punctuation and capitalization, would be ignored at best and result in a smiting at worst. However, changing it into "Oh, Space Father who art in Space Heaven, please grant me a way to escape/construct things." will be more likely to give a result, even if it may not be what you wanted.

You vs the Forces of Evil

Even as the most divine person on the station, remember: you are a civilian, not a Security Officer. As such, most "mundane" threats such as Syndicate spies, disgruntled employees, or warring gangs aren't matters you should involve yourself in. However, for supernatural threats, you're suddenly the expert.

Note that for almost all supernatural threats, a large stock of holy water will be useful, as the flask provided in the chapel only contains 100 units and religious supply crates from cargo contain only a single flask each. Luckily, the process of making holy water is much simpler than in reality: just attack a container containing water with a bible and it will be blessed, turning all the water inside into holy water.

In addition, holy water can be used to bless tiles, denying dark spirits from teleporting onto them. You can tell if a tile is blessed if it glows yellow after a short delay. Generally, you should only bless areas likely to be attacked, such as the Bridge or AI Satellite/Core.

In spite of how they may otherwise differ, fighting against blood and clockwork cultists tends to be fairly similar. Although you could wait for them to become a real problem and attack with security, it's generally better to stop the problem before it starts. That is, to have security arrest cultists, deconvert them using holy water, and optionally implant them with a mindshield to prevent re-conversion.

Your null rod does 45 extra damage against the constructs of blood cults. It can also be used to cleanse their runes.

Vampires are creatures of the night that will attempt to suck the blood of your fellow crew. Deducing that you have vampires can be tricky at times, but there are tells to be aware of, such as dead bats in the hallways and/or multiple bloodless bodies in medical. When the threat is confirmed, you should contact Security immediately and begin blessing everywhere that you can with Holy Water, as this will interfere with the Vampire's mobility tool, Jaunt. Personal eye protection and ear protection are also highly recommended, as a vampire's main offensive ability is to petrify and knock you out by making eye contact. When you have successfully apprehended a vampire, try not to kill them but knock them unconscious. If you kill them, they will have a chance to revive and flee. Your first priority with a vampire is to drag them into your Chapel (this can also be used as a deduction tool on suspected vampires) as soon as possible, as they will light aflame and turn to ash when they step foot on sanctified ground, making them unrevivable. Don't feel too bad about doing this, as vampires cannot safely be arrested or contained as long as they can jaunt.

Wizards are chaotic spellcasters with a variety of tools to turn the tides in their favor. Your null rod will protect from a majority of their magic, so you are a valuable asset against these masterful murdering mages. Wizards are extremely dangerous to take in alive, so coordinate with Security against the threat, and attempt to kill them through whatever means you have available. They may return through a variety of methods, however, and you must be prepared for every possibility with these dastardly foes. Some wizards may claim that they are friendly, and will attempt to make peace, though they are still Wizards at the core and should be dealt with by the joint effort of yourself and Security.

Heretics are dangerous opponents to fight depending on when in the shift you find them. The longer the shift goes on, the more dangerous and powerful these heretics will get, until they ascend and become nigh indestructible. If tears in reality are sighted, contact security for assistance, and have them start searching any potential suspects you see as well as people near transmutation runes. They will usually have their codex and heart on them, and if they have crafted one, a powerful blade that you must take caution with. Heretics can pick one of three paths to go down: ash, flesh, and rust.

Ash heretics have access to a short ranged jaunt, an ashen blade that will set you on fire and deal stamina damage if you are hit, and the ability to drain your life if you are on fire. If an ash heretic ascends, have a fire extinguisher on hand or stay close to showers. Long ranged lethal weapons are advised as you will be set on fire at closer ranges, and you must either bait out or run away from their room melting abilities.

Flesh heretics can revive corpses into loyal, mute servants or dangerous ghouls (as long as the body isn't mindshielded), make a weak monster called a Raw Prophet that has increased seeing range and x-ray, create a shapeshifting creature called a Stalker that inherits the stats and properties of what it transforms into, and use a flesh blade that causes profuse bleeding. Try to kill a flesh heretics servants before going after them, as you will be surrounded and murdered otherwise.

Rust heretics spread their rust across the station in a variety of ways, slowly healing on rusted tiles, and can destroy most structures as well as armor that you are wearing. Rust heretic blades inject you with poisonous eldritch water, and have unlimited smoke grenades. When a rust heretic ascends, they will heal incredibly quickly on rust tiles as well as having self spreading rust. Rust heretics are weak to stuns and as such can usually easily be stunned and killed while you get the chance to do damage.

If your god(s) hate you enough, you may also encounter a Revenant, an undead ghost creature that wants your souls. Again, your null rod is incredibly robust against these creatures. Use holy water to prevent their movement and check places with corpses to see it harvesting souls. When it's dead, don't forget to disperse the ashes.

As a traitor, your curse of being ignored by everyone becomes a valuable asset. The chapel is a relatively secluded part of the station, and odds are the AI won't be keeping an eye on it. You have a null rod, which gives you a leg up - you don't have to purchase a weapon unless you want to. Also don't forget that your bible is a useful storage compartment that won't attract suspicion (but does frequently get searched). You can drag around bodies, as well as both space and cremate bodies without looking suspicious: it's your job, after all.

Also remember that the morgue tray in the crematorium can store bodies, items and even whole crates (such as the syndicate surplus crate). It's not a bad place to hide stuff (especially if the camera suffers from an "accident"), but keep in mind the light on the tray turns orange if anything other than a body is inside of it.