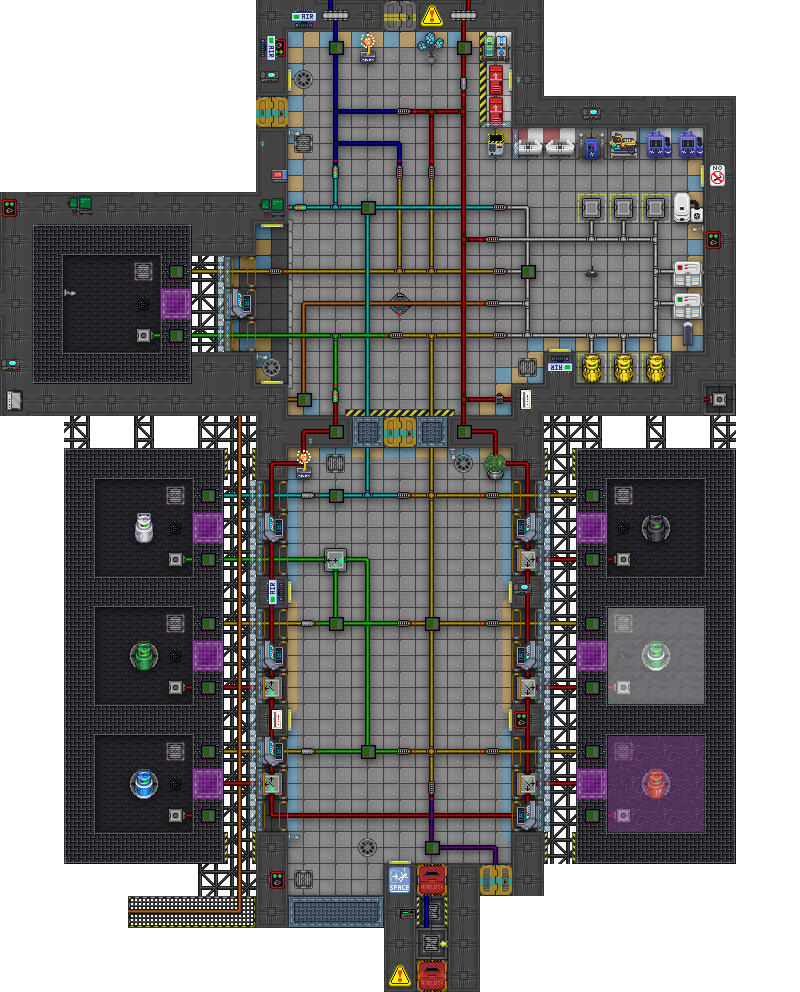 What you do is rather simple, if there is any sort of environmental disaster, head off and fix it! You have your tools, your engineering headset, pipe, space heaters, and atmospheric survival equipment. When things get quiet, sit back and start building an on-station super slide. Alternatively, make wacky engine designs, produce deathmixes that almost instantly kill or internals that grant superspeed and stun immunity, or ship super high value gas and make cargo jealous! Atmospherics is a job for those who want to explore and have the time and autism to do so, just when you think you've discovered everything, you'll find something new to keep you busy, until eventually you burn out.

The great city state of pipes, it is used as a jet pack recharge station for Syndicate Agents, a hide out for Wizards, a breeding ground of Xenos, and has a general alert computer that will tell if any place is messed up.

People rarely come here, but it is possible to do a lot of harm to the station if you know how.

What you Can do to Pass the Time

Atmos Techs usually have no clue what they can do, and often drift into a spiral of depression and suicide. Fret not! Here are some suggestions for you to do.

After the Engineers have taken care of a hull breach (read: if), or after Toxins floods the place with plasma, it'll be your job to refill the area and make it breathable.

This can be done by using the Atmosphere Alarms mounted in most areas, along with the vents and scrubbers in the area.

The primary utility of the Atmosphere Alarm in refilling an area involves the vents. Each vent has a pressure check value on it, and is by default set to pressure check externally - this means that the vent attempts to bring the tile it's on to the listed pressure. A rapid manner of refilling an area is to remove the external pressure check, switch it over to the internal check - this attempts to regulate the pressure in the pipes of and running to the vent below, which is directly fed by the distribution loop pump in the north end of Atmosia. Setting the "pressure bound" variable to zero with internal pressure checks attempts to void all air in the pipes, effectively reducing their pressure to zero and, in the process, flooding air at an alarming rate into the area. Given the impractically slow rate at which the air alarms normally fill the area, this can be a very expeditious way to work. Pressure is dangerous, so don't simply leave the vent alone for extended periods of time, as you can, eventually, turn smaller areas into death-traps if there is enough pressure in the distribution loop.

The alarms can be set to a number of modes:

Normally the vents will fill the room slowly by default, though using some filled Portable Air Pumps, or Air Canisters you can refill the area much more quickly.

BE THE FIRE FIGHTER THE STATION DESERVES

A fire is easily the most fun thing that can happen in a round (for you anyway); successful firefighting requires a real understanding of the atmospheric system. At all times, wear basic tools in a toolbelt and carry your firefighting gear in your backpack. When the call goes out, don your fire suit and gas mask, get yourself running on internals, put your oxygen tank on your back, and carry your fire first aid kit, extinguisher and reinforced glass in your backpack (carried in a hand slot).

Drag a water tank behind you and get to the fire. With AI cooperation, have the burning area bolted or welded off, save one access point the AI can monitor. This keeps the fire from spreading and chucklefucks from wandering into a fiery doom. Once inside, you must quickly determine the sort of fire you are dealing with. Pressure tanks of plasma can release massive amounts of fuel (or even burst!) and must be shut off or isolated immediately, while the best way to isolate broken pipes is to box them in with reinforced glass until a proper repair can be done. With fuel shut off, find the atmospheric alarm and set it to Panic Syphon.

This drains air out of the room completely. With this process started, check for survivors or bodies and either apply burn patches and epinephrine or simply remove them from the compartment via your access point. Next, seek out any ignition sources such as lit zippo lighters and disable them, reporting them to security for their forensic investigation. Then proceed with extinguishing any remaining pockets of flame. Once the fire is out focus on clearing any remaining plasma from the atmosphere by dragging in a scrubber.

Finally, set the atmosphere alarm to pump in fresh air. It may take several cycles of filling and draining the room to clear all plasma and make larger areas inhabitable again, but once you are done, head to the bar and score some babes while Engineers clean up the mess.

(Note this lengthy guide is only really useful for those big "Research done herped-a-derp" fires that engulf Med/Sci or are caused by very skillful arsonists. Smaller fires, such as the sort chemists who just learned the napalm recipe cause, really only require some fire-extinguisher blasts and setting up a room's scrubber to remove plasma and CO2. Never presume, however, that you won't need your full toolkit. This author spent well-nigh an hour in the fiery bowels of med-sci on one occasion, but not only did I never have to leave after I stepped in and sealed it off, but I had the situation so well under control that after five minutes normal shipboard life resumed and admins eventually had to spawn facehuggers to return a sense of danger to the crew.)

Total Emergency: The Fire Axe and you

The Fire Axe is your tool during emergencies (because you can use it like a crowbar to open door when the power is off) and your weapon (traitors, revolutionaries and cultists usually try to steal the axe because you can kill a person in seconds). The fire axe is protected with a Fire Axe Cabinet. To open it, just take a welding tool, turn it on and hit the fire axe cabinet a lot of times and take the axe. You can also use a multitool to hack it open, but who does that?

A good way to be proactive within your job is fixing the broken windows that occur every round. Gird your loins with a toolbelt if you can, grab some metal and glass, and patrol the outer passageways. Almost always, the task requires a low-pressure or no-pressure exposure to the great beyond. By creatively rotating and moving surviving windows you can lock in your precious atmosphere, then replace the broken glass and grill. The truly hardcore technicians do minor spacewalks with only the flame of their welding torch for heat, sipping sweet oxygen through their breath masks behind a welding helmet. Are you hardcore? No, you're not. Go back to being a hardsuited engiqueer who can't find a hull breach without a pair of mesons and never bothers to fix them anyway.

You can purge the air of of rooms using an emergency siphon, or change the air filter controls by deal with the air alarm attached to walls! Just take your ID in hand, and click to un/lock it and play with the controls. Setting up the pumps in Atmos now allows you to pump any gas to any point in the station!

Protip: Since you're in charge of both breathing and firefighting, Murphy's Law says you're screwed.

You have two machines! One Machine is for for gas pipes, and one for disposal pipes. To install gas pipes, simply click on them in your hand until they are properly aligned, drop them on the tile they are needed, and use the wrench on them. For disposal pipes, one must drag them into position, wrench them in place on the subfloor, then weld them to seal it all together. A personal locker makes a great method to haul all the air pipes you'd ever need between job sites, but disposal pipes must be dragged one at a time. Expect Security to frequently and irrationally demand the locker be checked for bodies, usually three or four times a minute, if you use the main hallways.

Silly things like setting up atmospherics is for puny mortals and chumps. After doing the absolute bare minimum of your job, you can go and do the most high-risk project on the station: Fusion engines. A starter atmos tech may make large amounts of tritium and ship it to cargo and be happy he made 20k credits. An atmos god at the higher ends of the autism spectrum can make canisters worth several million, or special internal tanks that give superspeed and complete stun immunity for maximum greytide, or infinite electrical power with more energy than the big bang. Atmospherics is about experimentation and making new things, unlike regular engineers who do the same thing over and over again. Be warned however, that the process of discovery is particularly arcane and the guidance of an atmos elder makes it much, much easier.

Traitor atmos techs have the potential to become one of the most devastating forces on station. If you know what you're doing, you can pretty much flood the station with whatever harmful gas you want. If you do, remember to take measures against the AI messing with your work, and always keep your internals on. This means either subverting the AI or cutting its access. If you're feeling particularly daring, you can unwrench the pipes and rearrange them, ensuring the AI cannot fix it. Bolt the doors, or set the room on fire to prevent humans from fixing it too. Depending on how bad it's going to be, you might want to procure a space suit to escape the hell you've created.