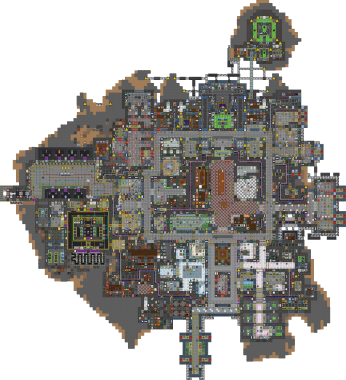 Heads of staff are limited to one Captain, one Head of Personnel, one Chief Engineer, one Head of Security and one AI. Jobs such as medical doctors and engineers have their available slots reduced to accommodate the smaller station size.

Due to the small size and lack of head offices, many traitor target items are either inside regular department lockers, the vault or engineering secure storage.

Added new spare id locker in captains room by JamieD12. Removes the spare ID from the Captain's locker and moves it to a cabinet on the wall.

NT has sent their finest engineers to fix omegastation by redmoogle. This adds HoS and CE to the station, increases the size of some rooms and adds disposals.

Added Cryopods by JamieD12. Adds cryopods to the locker room.

omega gets a nanite lab! by wejengin2. Adds the nanite lab and the holotool.

Tweaks to sm loop on omega by wejengin2. Updates the SM loop.

moves the autolathe on omega by FLME. Due to the lack of population on this map, the autolathe is often impossible to reach without breaking into Cargo. This change moves it to the hallway outside Cargo.

Firelocks by Ktlwjec. This change added a bunch of firelocks due to the addition of MonsterMos.