Credit to Yacabo111 for writing this guide!

Welcome to a guide to toxins, this is not a guide made by a professional but by someone willing to remake a years out of date guide. If you do not know, Toxins is the place in science that makes bombs and or maxcaps by using a burn chamber to heat Plasma and or Tritium. In this guide, we will be making a Tritium maxcap. This guide will be in YogBox, so some intuition may be needed on other stations.

The default toxins setup, while usable, is ineffective in making what we want and as such will require some rearranging. To do this, we will need:

All of these should already be in toxins, so there is no need to hassle someone else for them.

The output pipe is simple to adjust, all you must do is replace the manual valve and gas pump with a volume pump and pipe. Ensure the volume pump is on, pumping to the east, and on max

The input pipe is a bit trickier - first, the manual valve must be replaced with a manifold pipe facing west-north-east and directly north of that, another manifold pipe north-east-south, attached to the manifold pipe should be two connectors on the north and east side. Finally, replace the southern gas pump with a manual valve and made sure it is closed. Essentially, this setup allows much of the gases to go in all at once for a better burn and while the output dumps as much as it can into the Tritium canister.

Next, we will fix the gas mixer.

The only thing needed to do is to replace the pipe under the gas flow meter with a gas mixer that connects to the pipes next to it and faces south. Open the mixer’s menu and set Node 1 to 4% and Node 2 to 96%, set the output pressure to the max, and turn the mixer ON. It may be worth taking the southern connector and attaching it directly to the mixer output rather than having a pipe separating the two, but it is not necessary.

Fun Fact: You can relabel the colour and name of the canister by pressing the ‘relabel’ function in their menu, this means that you can keep track of which canister has what gas and also that any canister can have any gas.

Assuming you connected all the canisters in the right positions, you are now putting a mix of gasses into the caution canister. The actual mix is 4% Plasma and 96% Oxygen, and it is impossible to explain why and what this will do as the atmospherics code is based on nearly two decades of spaghetti and duct tape.

None the less, we will need three full canisters of this mix which will also require more Oxygen canisters as well. The actual max limit of what a canister can handle is infinite, but for our intents, they can only go up to 4500kPa; it is not necessary to reach this limit but as close as you can. Do note that you can use empty oxygen canisters and fill them with a mix as well.

Once three mix canisters have been filled, grab an empty canister and set it to the end of the output pipe, it’s also best to relabel it to a Tritium canister, though it is not necessary. Once the Tritium canister is in place, check to make sure that the southern manual valve is closed and wrench the mix canisters on the input pipe’s connectors.

Now’s the fun and relatively automatic part, making and heating the Tritium. Go to the Air Alarm by the burn chamber’s airlock doors, access its menu, go into scrubbers, and set the one and the only scrubber to ON, expanded, turn on Tritium, and turn off Carbon Dioxide. This will set the scrubber to ONLY scrub out Tritium, which is what we want. Once everything is set all that’s needed is it to open the manual valve and watch the gases burn.

If you’re not curious about what’s happening, skip this paragraph.
For those who remain, it is worth noting that as in real life, most things require Oxygen to explode and burn. As you might imagine Plasma is no different, but what is interesting to note is that the plasma burning is creating H3 or Tritium, which is great for fusion energy both in the game and in real life. Once the Tritium is formed, the scrubber is automatically and selectively siphoning it out and into the output pipe; and since the Tritium was made by burning Plasma, it’s already hot.

Once this burn is completed, you should be able to scan the Tritium canister and get ~22mols or ~2200kPa (Some of that may be water vapour). This is enough to make a few bombs.

To make the bomb we’ll be taking the heated Tritium and some Oxygen, putting them both in their individual tanks, and combining them in a setup that will combine the two on our command.

Next, take a plasma tank and fill it up with Tritium just like you did with the oxygen tank, and yes, we do want the Plasma that is already in the plasma tank.

Now that we have everything we need, we will make the bomb: 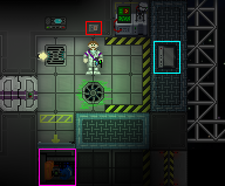 Congrats, you now have a bomb you can set off at any moment now.

It’s best to say this now, do NOT blow up random parts of the station. If you want to blow something up, be it because you are a Traitor, there is a Blob, you want to invade Reebe, or some other reason. Adminhelp an admin before you detonate your bomb to make sure you have permission to do so, else you will be banned.

Obviously, the bomb testing site is an exception to this rule which we will be using in this guide.

Go over to the eastern room launch room that gives you a good view into space. In here you will launch, detonate, and scan the bomb.

All that’s needed it to place the bomb in the mass driver, press the launch button, check the camera to see if the bomb is clear to explode, and then send the signal to detonate it.

The tachyon-doppler array will automatically scan the explosion down and give some points to research. If you check back at the testing site you should see it is only barely there now, admire your new found work and try not to think about blowing up the rest of the station.

Weeeelllll… not much actually. The note about how you shouldn’t blow anything up without ahelping is probably the most important thing in the guide, that’s because the devastation you can cause with these bombs is massive. You might be able to hand one off to the miners so they have a bit easier time mining, but really, unless you have a bomb target, there isn’t much to do.