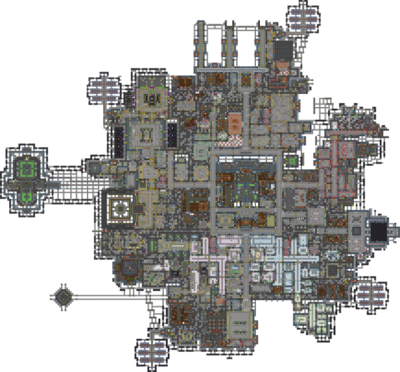 DeltaStation was first released by Okand in the winter of 2016 and was first added to Yogstation's rotation in 2018. Delta is a map heavily influenced by Meta and Box, with a large centralised bridge area. Intended for higher populations, the map features a more fleshed out and spacious interior lushly decorated and accommodating a large number of potted plants. A large maintenance with a number of useful half-built rooms and areas give antagonists a large variety of spacious areas to make their on-station bases and hiding places.

Some key points about DeltaStation:

Adds a gift vendor by wejengin2. The clerk office originally had a gift vendor before the Yogstation rebase, where it got lost. This change adds it back.

Adds back command EVA suits by Ktlwjec. This change allows the HoP to have access to a space suit, as they were previously the only head of staff without easy access to one.