The history of SS13

Here's a brief account of the history of Space Station 13. When the path branched, the path that leads to /tg/station is taken.

Yogstation was first known as Apocalyptic Station, founded by IDWMno. The community grew between 20-50 players average a day and night. Over time the server decayed and another server, hosted by an Apoc-Senior administrator was formed, and Apoc fell to its superiority. The new server was renamed Yogstation and everyone jumped ship to it, including the admins and players. EliteIxHitman was the host of this new station. Over time, as with the predecessor, the server fell on hard times and became laggy and unbearable. And thus, one of the council members, 05rhardy/Xantam, stood up and hosted a server and offered anyone who wished it, to jump over. The old server could not compete and a split happened. Eventually the old server collapsed gracefully, and now stands the all powerful Yogstation13! 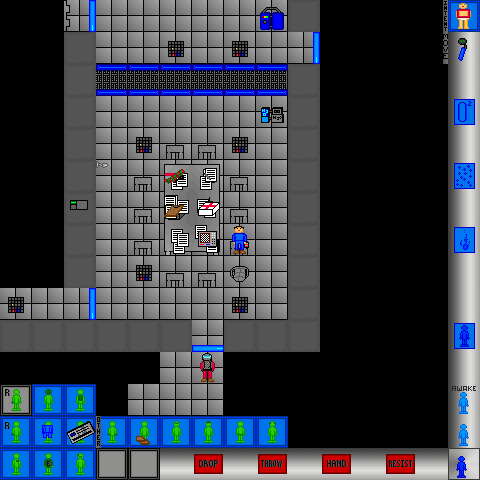 The old look of Space Station 13

Space Station 13 started out as the creation of a person known by the alias Exadv1, but not much else is known about them, according to giantbomb.com. It's not like he's a member of the community here or anything like that... ... ...

Anyway, after its release in 2003, the first few years the game and game mechanics were kept in extreme secrecy. You could get banned for talking out of character about game mechanics or through other means, which are not in chracter. The original map (image needed) for Space Station 13 was updated through the years. Generally the map that pre-dates power and electricity generation is referred to as Originalstation, and all maps after that are referred to as OldStation. Rounds on Space Station 13 were similar to how they are now, eventually ending in the escape shuttle being called. Players numbers peaked at 10. Acquiring server files was difficult though, as you had to acquire them from one of the few people who had them. Never the less, SS13 servers started appearing on byond.com. The server files were sent as a compiled package (the .dmb and resource files only). It was also possible to acquire a version with defines, icon files and the map files. This version allowed you to edit the map, but you had to send the updated map file to someone with the original source, so they could compile it.

After about three years, the popularity (yes, 10 players on a server was considered a popular game) of Space Station 13 started to drop. The few people with the original source files started to lose interest. During a house visit, a 256MB flash drive probably saved the game from extinction. So yeah, the source was stolen by someone. It was however not released to the public. The person hosted their own server, only sharing the compiled code. Fortunately, a reverse-engineering tool existed for BYOND compiled servers existed at the time, so someone reverse engineered it to get something close-enough to the original source code. This code was spread around from person to person until someone had the bright idea to start a community called OpenSS13. This was the first open-source version of Space Station 13. Around the same time, the Something Awful Goons began to notice the game and several goon-hosted servers appeared.

In the era from 2007 to 2009, Space Station 13 gained a lot of popularity with communities like Penny Arcade, Goonstation and OpenSS13 starting to grow. Player numbers reached unbelievable peaks of 18 players! The map everyone played was still Oldstation. Each codebase however had its own, slightly edited version. OpenSS13 used the OpenSS13 Oldstation map, while goons used the Goon Oldstation map, the latter of which is now the Derelict. It was during this time that the Goonstation community revised the original SS13 backstory and produced what is now generally accepted as the proper backstory.

In 2009, as Space Station 13 servers were getting up to 25 players at peak time, Goonstation coders and mappers made the biggest advance in years. They created a new, much larger station: Donut Station. As Goonstation was closed source, no other community could use the map, so they stuck with the OpenSS13 version. popularity of SS13 steadily increased through 2009, eventually leading to the creation of yet another map design in 2010, dubbed Uterus station. The release was accompanied by a rewrite of much of the old Space Station 13 code, much of which was still tainted by fallout from the reverse engineering from years before that. In April 2010, as player numbers on servers were hitting 50, Goonstation decided to release their source under the name Goonstation r4407. Until 2016, this was the latest version of the Goonstation code publicly available.

2010: The original creation of Yogstation

Around June/July 2013 05rHardy decided to do something about developing lag and disconnects becoming more and more prevalent in the original Yogstation server hosted by ElitexHitman. Despite attempts to work something out with Hitman Yogstation was nearly shutdown as a whole and the new Yogstation13 was created! From then til now it has seen pretty balanced player counts ranging between 40-70 players at a time.