Difference between revisions of "Warden"

The Warden is a member of the security staff, responsible for the Brig, the Prison Wing and the prisoners. Also charged with minding the Armory.

Your Domains: The Brig + Security Office + Prison Wing + Your Office

Once more: STAY IN THE GODDAMN BRIG!

Even more important: STAY IN YOUR GODDAMN OFFICE, WATCH THE DAMN ARMOURY!

If you have no prisoners to watch out for, you should be coordinating the security officers over the security radio channel. People often make accusations of crime on the radio that you can follow up on. You can ensure all arrest records are filled in with this and with information from the security radio channel to make sure officers don't wonder why a particular person is wanted. You can also check on the cameras for reported disturbances and update the records of anyone involved (which should be done regularly). Your fellow officers will appreciate your help in sending them where they can make a difference. You really have the opportunity to make Security run like a well-oiled machine.

As the Warden, you have authority over the brig and any security officers inside the brig. Should anything happen to the Head of Security, you are expected to take up his position and command the security staff.

Just give the detective space, he's a loose cannon that runs around and scans for prints. In the rare cases where they do drag someone in, they'll need help with the brig timers and securing evidence. Since almost anyone (even lawyers) with brig access has access to evidence storage, the more dangerous evidence should go in the appropriate locker in the armory.

Nominally, officers aren't under your command and are not required to follow your orders. That being said, if they're in the brig and mucking around, you are well within your duties to order them to leave. Otherwise, try to be the benevolent eye in the sky and keep tabs on the whereabouts of your team.

When used correctly, the station's legal counselors can provide an extra layer of security by keeping an eye on things or by policing the various debris and detritus that crops up over the course of a shift. Pass out some spare sunglasses or a SecHUD (if you're feeling particularly generous) and don't refuse their clients' right to counsel. If you wind with a criminal attorney on your hands, don't hesitate to bring the hammer down. 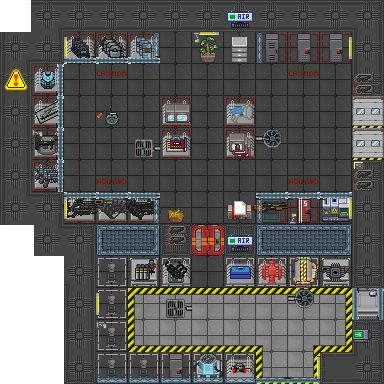 Given the ever-present threat of prison breaks and riots, a skilled Warden is a well-equipped warden. Your locker contains a Compact Combat Shotgun, a box of flashbangs, some extra zipties and burn resistant gloves that teach you krav maga. Stuff some of that in your bag.

There are also some pieces of kit to help you out. Barricades are excellent if someone has broken the brig doors with a cryptographic sequencer, and portable flashers, although they have limited charge, are very useful at stopping poorly equipped attackers or budding escapees. You also have a toolbox to help you install the flashers and make other basic adjustments. Make sure no one gets your ID, and that you know who the Head of Security is (in the very real case that someone murders them and steals their identity). Your ID is a high-value target, so make sure no one gets their grubby hands on it. You also have access to the HoS's Door Control Remote, which you can use to bolt down certain doors in the brig.

Don't forget your small supply of firing pins, which are the only way to make a usable gun from Research and Development. Don't be too stingy: If you help the Research Director, they might give you some nice toys later on (Mindshield Firing Pins).

The Armory contains different sets of implants which you may want to make use of for prisoner control.

These will allow you to inject up to 50 units of toxins into the subject at any time from the Prisoner Management Console in your office. May be loaded with sedatives instead. For larger doses, subject may be implanted multiple times.

Prevent the subject from being brainwashed by commies, zealots, and mobsters. They also revert the effects of some conversions. If someone resists them, they're either a ringleader or something much worse. More can be ordered in the Cargo Bay, albeit at an extremely high cost. Ensure all security personnel are loyalty implanted by checking your Security HUD.

Sitting at your desk is alright, but you should make sure to scan the cell blocks every once in a while to make sure no one is hurt in the cells, or that no one has broken in. Your job is to protect all of security from people busting in, or out. A quick sweep every few minutes should be fine, being a warden is a mostly relaxing job, just make sure to stun anyone who looks suspicious in the brig (or security office area) and hold them till the head of security comes. Remember, DISARM FIRST, kill if that's your only option.

If you are going to sit around, the least you can do is update the security records for your prisoners and anyone mentioned on the radio.

Referring back to the chain of command, remember that the Head of Personnel is not your superior, nor are they a member of the security team. If they are trying to break into the armory without prior authorization throw them in a cell so the Head of Security or Captain can have a talk with them. Remember they might not be the Head of Personnel at all!!

Make sure that all officers and heads of staff have a loyalty implant or else you might have a bad time.

Sometimes, things get so bad you need to close everything off. One button will activate bomb-proof shutters underneath each grille to stop breakouts (or breakins), and another will seal off the perma wing if the prisoners are rioting. 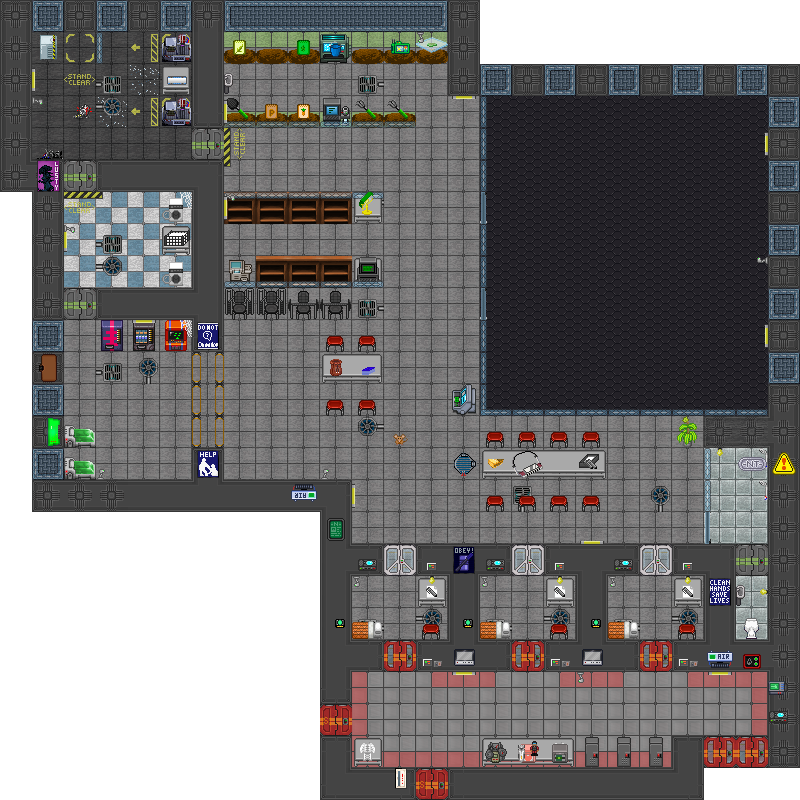 Space Station 13's secure Prison Wing. Once you check in, you don't check out. There are no times here - this is a place for hardened criminals. Expect to use this rarely, as many traitors get melon bowled before this becomes an option. Only you, the Head of Security, or the Captain should ever be taking people to it and only for the most heinous crimes.

If you do not pay attention, sometimes the Prison Wing may become a death camp. Periodically check it and make sure shitcurity, space carp, other traitors, or micrometeors aren't abusing the prisoners.

Should the situation inside the prison get too messy, you always have the option to release N2O gas into the holding area. There are two canisters of the stuff near the gulag shuttle. Make sure to Drag the canister into the brig, don your internals and let 'er rip. Be sure to alert your comrades in arms about the change of atmosphere though.

Space Station 13 has a completely functional labor camp. Consider sending prisoners here if they are particularly unruly and need a well deserved vacation from the station. Before sending a prisoner to labor camp use a prisoner ID and set a point goal for them to achieve. Make sure to point out the card console in the labor ship as it is often overlooked. Prisoners are given a sleeper, toilets and mining equipment. Be aware that many a foolish officer has died to the labor camp pickaxe. For this reason and many others be very cautious when sending prisoners here. Again, remember to give the prisoners a point goal or else they may be stuck there forever.

NOTE: By default the Warden cannot be an antagonist.

So, you're a traitor. You start with gloves, an energy gun, armor, and sunglasses. You have access to a ton of guns, and a ton of other things no station member could dream of. Problem is, you have poor access to the station, but you have a whole brig and gulag to play with (depends on how sadistic you are) and may create your own private death camp. You are less likely to be "needed" compared to a head of security, and less likely to be expected to respond to call than a security officer. Yet, running about station will attract attention (aka, "GTFO warden and back to the brig"), so get done what you need to and do it fast and remain in the safety of the brig.

If you have a "steal" objective, there's an okay chance that someone else tried to break in and steal that item, you can just take it from them. If it's an assassinate objective, well, most people go through the brig at least once. Just stun, strip, and space them. People going entirely missing from the brig isn't usually investigated if you just say their time was up, or if that pesky security is getting on your case for all those dead assistants in your office, head to the execution chamber, grab a canister of co2, go back to brig and hook the canister up to the airflow and kill everyone in security.