Difference between revisions of "User:Anvilman/Sandbox"

Unathi are not to be confused with the cute little lizards.

From a mechanical standpoint, Unathi are nearly identical to Humans, save for a number of important points, which are listed below.

They are disallowed from serving in Command roles. They suffer from lack of protection under Silicon Laws. Those with digitigrade legs are unable to wear shoes.

To expand on these drawbacks: Due to existing mandates from the United Earth Government and Nanotrasen, any non-Humans are not allowed to serve as Heads at roundstart - many Unathi are promoted to fill Command roles in times of short staffing, but this falls to the discretion of the station's existing Command staff. An Asimov AI or Cyborg is not obliged to listen to or protect crewmembers of this species due to them not being Human, as is specified in Asimov's Laws of Robotics. Additionally, they tend to be looked down upon by most of the (human dominated) crew, and will often be the subject of mass derision and bigotry. Choosing a digitgrade leg structure for your Unathi character means that you will be unable to wear typical footwear, and as such will need to be wary of floor-based hazards, such as broken glass or broken lightbulbs.

Concisely, the Unathi are a race of tall, humanoid reptiles.

Unathi possess a mix of draconic and reptilian characteristics, with a variety of differing body features showing these heritages, from hard scales to leathery hide on their bodies, horns on their heads, large head frills, and pointed or rounded snouts. Coloration for their scales and hides can vary across the entire spectrum, from red to yellow, green, and blue. While coloration is not indicative of any particular traits or differences, some Unathi and Humans tend to castigate those with vibrant colors, seeing them as eyesores.

Unathi legs come in either plantigrade (flat footed) or digitgrade (backwards jointed leg) structure, due to vast genetic drift on Moghes. Many Unathi view digitigrade legs as a sign of pure heritage, hearkening back to their reptilian and draconic ancestors, whilst other Unathi view digitgrade legs as a biological flaw - a complicated and ultimately vestigial structure that prevents the wearing of most modern day footwear.

Unathi tongues are bifurcated, bearing a unique fork down the center. Their tongues are sensitive to smells and variances in atmosphere, akin to snakes, and they give Unathi a distinctive hiss when speaking. This lisp is oftentimes ridiculed or found annoying by Humans, which has led to some Unathi seeking tongue transplants as a way to better integrate into Human society.

Unathi eyes tend to be stronger than Humans, able to perceive things more sharply, as many generations of their species were hunter-gatherers on the surface of Moghes. They are also skilled at tracking motion, but are occasionally fooled by things that remain very still.

Unathi hail from the planet Moghes, an enormous desert planet located close to the edge of Human controlled space. The planet is vast, and its history is immense and convoluted, but at the core it is driven by a tribalistic Clan structure, with many groups either cooperating or conflicting to attain more power, all while attempting to advance the Unathi as a whole. Roughly three hundred years ago, this Clan system consolidated into the Unathi Great Clan, allowing most of the Clans to unite into a centralized formal government, which became the driving unifying force of the people. Though most Clans have been disavowed and done away with in modern times, Clan mentality still permeates Unathi society, and they trend towards distrust of outsiders and excelling in their chosen professions to bring honor to themselves and their people. Additionally, there are still many active Clans and other groupings of Unathi in various stages of development all across the surface of Moghes, hidden among the unexplored desert sands and bluffs, discovered from time to time. 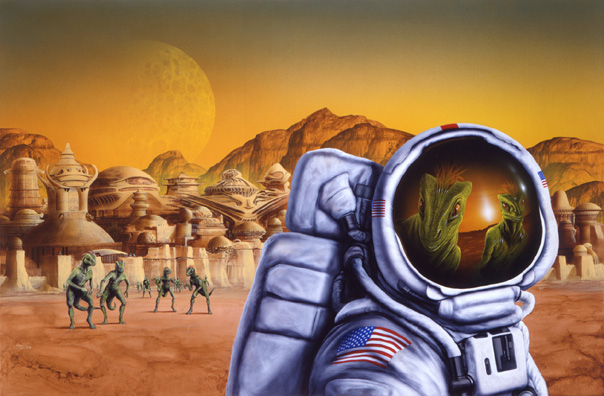 Artistic rendering of first contact between Humanity and the Unathi

First contact with Humanity took place in the year 2480, with Human explorers representing the United Earth Government (UEG) and corporate interests, including Nanotrasen, coming across the Unathi while scouting Moghes for usable resources. While the United Earth Government classified the expedition as a failure, as it failed to find much in terms of mineral or environmental wealth, the explorers from Nanotrasen and other corporations rejoiced, as they had discovered a wealth of labor to be exploited. With political strong-arming and multiple well placed bribes, Nanotrasen received UEG approval to bring Moghes under their control. Eager to expand, Nanotrasen launched what amounted to just under a full-scale invasion of Moghes, obliterating massive swathes of the population, planet, and government. Though brave and skilled combatants, the Unathi stood little chance against corporate soldiers with space-age technology. Within three months of conflict, what little remained of the Great Clan formally surrendered, giving Nanotrasen full control of the planet and its population. The Great Clan was dissolved, and Nanotrasen installed themselves as the new leaders of the Unathi, quickly filling the planet with space-age developments, from medicine to space travel, bringing about a technological revolution for the people they had just conquered. The Unathi population reeled from this development, having been deprived of their sovereignty, and suddenly forced into a new future; their corporate overlords were fast to exploit this. Nanotrasen quickly began staffing dangerous and menial job vacancies in their workforce with Unathi, shipping them to various corporate mining installations across space and other planets. Though beaten and all but enslaved, the Unathi held their heads high and applied themselves wholeheartedly to the jobs they were given, in many cases working harder than their Human counterparts to prove their worth. Resented and reviled by Humans, the reptilian Unathi fought an uphill battle every day of their lives, but their pride and spirit remained unbroken. Unfortunately, not all Unathi were set on this prideful path, and some segments of Unathi became slavers and raiders, gaining fearsome reputations while the others of their race toiled to earn basic respect.

Four decades after initial contact, Nanotrasen made a bold move and allowed the Unathi to reconvene a formal government on Moghes, one overseen by the UEG and Nanotrasen. This gave rise to the Unathi Hierarchy, an organization loosely based on the Great Clan of years past. The planet was divided into Districts roughly along old clan lines, with each receiving a delegate to the Hierarchy, whose power is scaled proportionally with the population and size of his or her District. The representative of the largest and most powerful District is recognized as the Great Patriarch (or Matriarch), and official leader of the Unathi people. With a government reinstated, the Unathi became a more powerful and formal force on the galactic scale, able to represent themselves and conduct diplomatic and militaristic efforts of their own accord.

Another three decades passed in relative prosperity for the Unathi. With a central government of its own, Moghes flourished, utilizing the technology brought in by Nanotrasen to become a modernized society, even while still suffering societal suppression at the hands of Humankind. Then in the year 2550, Nanotrasen made another bold move, in creating and signing the Species Equality Act alongside the UEG. This Act delegated Unathi to be afforded new employment opportunities, declaring them to be closer to equal with Human laborers. With this Act, Unathi were now able to hold low-level jobs in UEG and Nanotrasen facilities, being adequately compensated and respected for the work they were doing. Four years after this Act, with Unathi proving themselves to be able to adapt to the jobs set before them, an amendment was passed by Nanotrasen and the UEG, proclaiming Unathi to be able to serve in most all positions in UEG and Nanotrasen facilities, excluding Command roles (excepting in emergency situations). With these back to back vestings of new rights upon their people, the Unathi civilization again experienced a cultural revolution, with a universe of new opportunities opening up for any and all of the race. Many modern Unathi now find themselves working in security and engineering roles, but many have proven themselves as inspired physicians and brilliant scientists as well, a far cry from their prior existence as slave miners.

Unathi tend to form close knit communities with their fellows, and they tend to be wary around Humans, due to a combination of the limited amount of Unathi on space stations, but also due to the harsh treatment their species suffered under Humankind. While many Humans are still somewhat racist towards Unathi due to lingering racial tension, many Unathi tend to hold little ill will towards Humans, and will mostly let these negative feelings go in the spirit of better race relations. This isn't to say they will completely turn the other cheek when faced with hostile derision, however - most Unathi have large amounts of pride, and will react accordingly.

Unathi names are typically two words in Draconic connected by a hyphen, or three "translated" words in English, also connected by hyphens. Examples of this are Czark-Azlan, or Fixes-The-Problem.

It is a strong social faux-pas to use an Unathi's first name if not family or extremely close to the Unathi in question. Generally, an Unathi will tell someone when they feel comfortable with the person using their first name.

It is also extremely distressing to an Unathi for people (whether Humans or otherwise) to touch or tug on their tail. To be allowed to touch an Unathi's tail is a sign of deep trust.

Unathi who work in team based environs, such as with Security forces, show a near unbreakable loyalty to their team. This can be attributed to how many teams emphasize friendship and cooperation between personnel, which is emulative of old Unathi Clan structures.

Unathi place great emphasis on oral traditions, as well as reading, writing, and knowledge of history. They believe those that lack these traditions are lacking in intelligence, and will attempt to spread these ideals when they can.

Unathi are very proud and unwilling to admit weakness or ask for help in most cases, being descendants of dragons. Some view this attitude as arrogant, but they view it as self-sufficient.

Unathi are deeply curious and intelligent creatures, eager to glean new knowledge or perfect their existing knowledge. Many take knowledge and research based postings with ease.

Many Unathi are powerful combatants, preferring to fight one on one without the crutch of ranged weapons. Melee and single-target based combat is viewed as an honorable true test of skill.

An Unathi character can be created in the character creation panel in the game lobby, and they possess special customization options for appearance such as skin color, spines, horns, and antennae. Unathi attack with their claws to slash and hack people, though this does not deal any additional damage. They also have a pronounced lisp when speaking, and can communicate in Draconic with other Unathi or those able to speak the language.

NOTE: as an Unathi, the AI does not consider you human and is not obligated to listen to you and an Asimov AI will often respond lethally should they find you harming a Human. However, this also means the AI can allow you to put yourself into harm's way in a positive manner, such as opening a airlock exposed to space to save someone.

Members of the crew may look down on you for being an Unathi, and it falls to you to exceed their expectation. Hold yourself high and show them what you're made of.