Kocмичecкaя Cтaнция 13 (lit. "Space Station 13") was a highly secret plasma mining and research station allegedly launched by the Third Soviet Union in 2544, and destroyed two years later in a bombing by the Syndicate, ultimately becoming a derelict vessel. Nanotrasen officials have denied knowing anything about KC13 or the bombing. Contrary to the Nanotrasen story, KC13 was most likely a predecessor to the modern Space Station 13, as both stations contain near-identical technology and a similar layout.

The "KC13" sign in one of the Derelict's hallways. 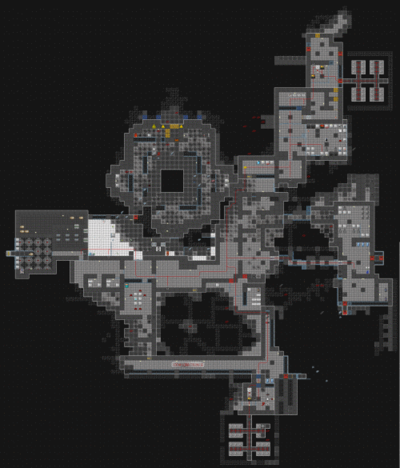 In-Game, the Derelict is where most things thrown into Space eventually end up. It is by far the largest structure in the space around SS13. The easiest way to end up at the Derelict is to launch yourself out of the mass driver in SS13's chapel, which will send you on a high-speed journey that will put you at the Derelict's Chapel (note that due to the nature of space it is also possible to wind up at Telecomms, if this is the case you'll want to kick off the Telecomms Satellite right below the external airlock, which will eventually put you on the other end of the Derelict).

The most important feature of the Derelict is its teleporter, located in a small room due south of its chapel that is not attached to the rest of the station. The Derelict's teleporter is the best way to get back to the main station from Space (unless you have external airlock access or can hack doors to get into Telecomms from space).

The main portion of the Derelict is only slightly more hospitable than space itself. Most of the station has proper atmosphere, but is freezing due to multiple hull breaches and is not survivable without a space suit. The ship's courtroom (located due east of the Chapel) is still warm. Some particularly intrepid Engineers have been known to use the courtroom as a staging point for attempts to reclaim the Derelict. Note that reclaiming the Derelict will usually require hacking the doors, as while they will respond to IDs from the main station, the access levels on KC13 were slightly different than on SS13 (one notable example is that the Med-Sci wing doors are only openable by the Research Director, CMO, or Captain by default). Power can be restored to the Derelict by restoring either of its two solar panels, which require exactly two lengths of wire each.

Exploring the Derelict for items is mostly a pointless endeavor unless you're looking for something specific. A small list of things that can be found on the Derelict (and their potential uses):