Difference between revisions of "Chief Engineer" 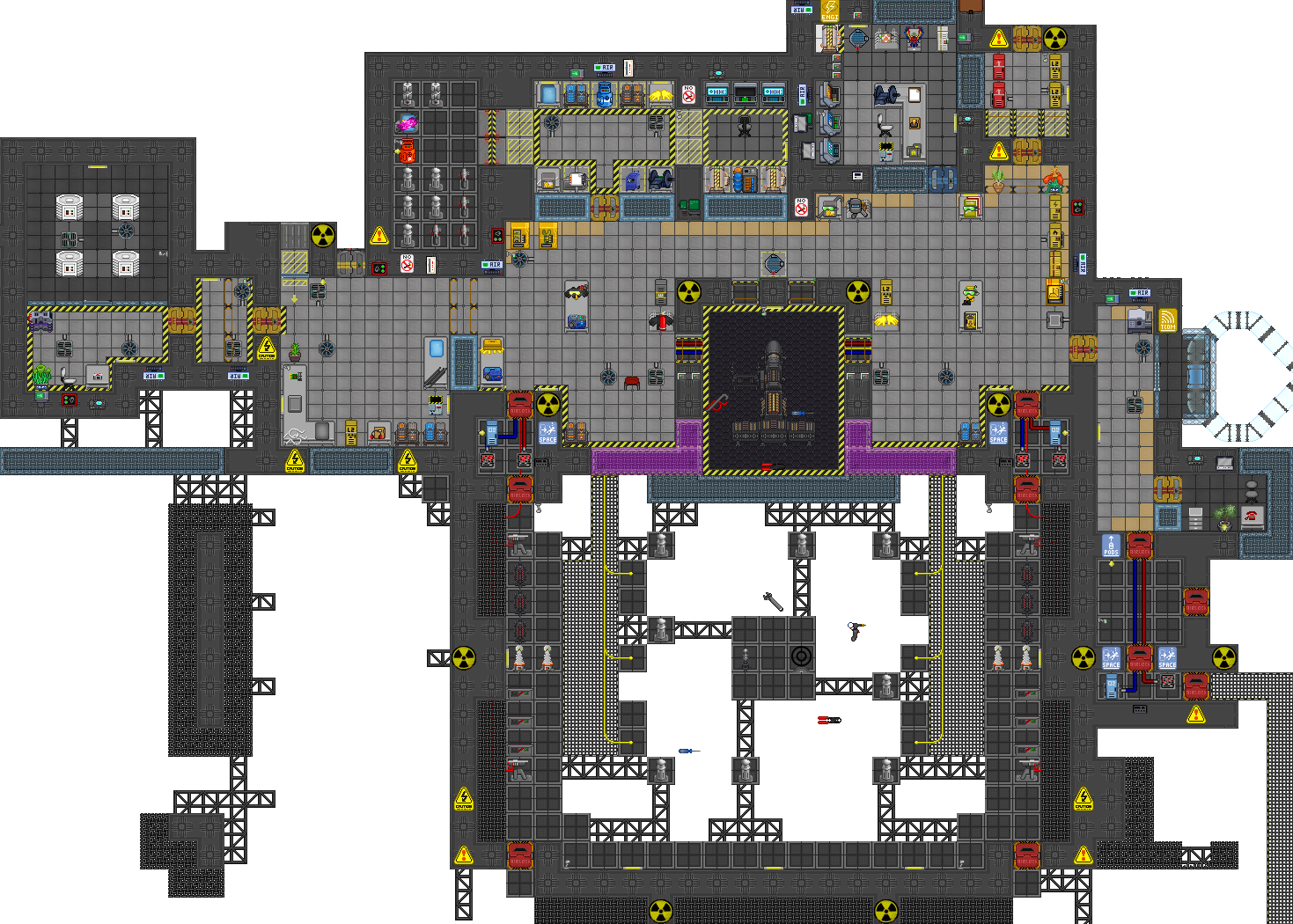 Know that guy who builds all the things? Well, he has a boss, and it's you! You are the head of the Engineering Department, which includes not only Station Engineers, but Atmospheric Technician and Signal Technicians as well. Essentially, your job is to boss your staff around and make sure the power flows. Other than directing the workflow of the department, you're also expected to carry out general engineer-duties and maintain Telecomms. To be a good CE it is imperative that you have a good working knowledge of how APCs, SMES cells and power in general works, how to decipher atmospherics, how to efficiently set up the singularity, tesla and solars and how to get your charges' sorry asses moving.

Bare minimum requirements: Make sure that at least one power source goes online at the start of the round. Know what to do when Telecommunications gets blown up.

It's no secret that Engineers are more often than not the laziest of the station's crew, and that there is no job that surpasses the capacity for an Atmospheric Technician to be completely clueless about his own department. This is where you come in! As stated above, your duties consist pretty much entirely on telling the Engineers and Atmos Techs to work or just doing their jobs yourself. Listed below are those jobs.

At the Start of the Round 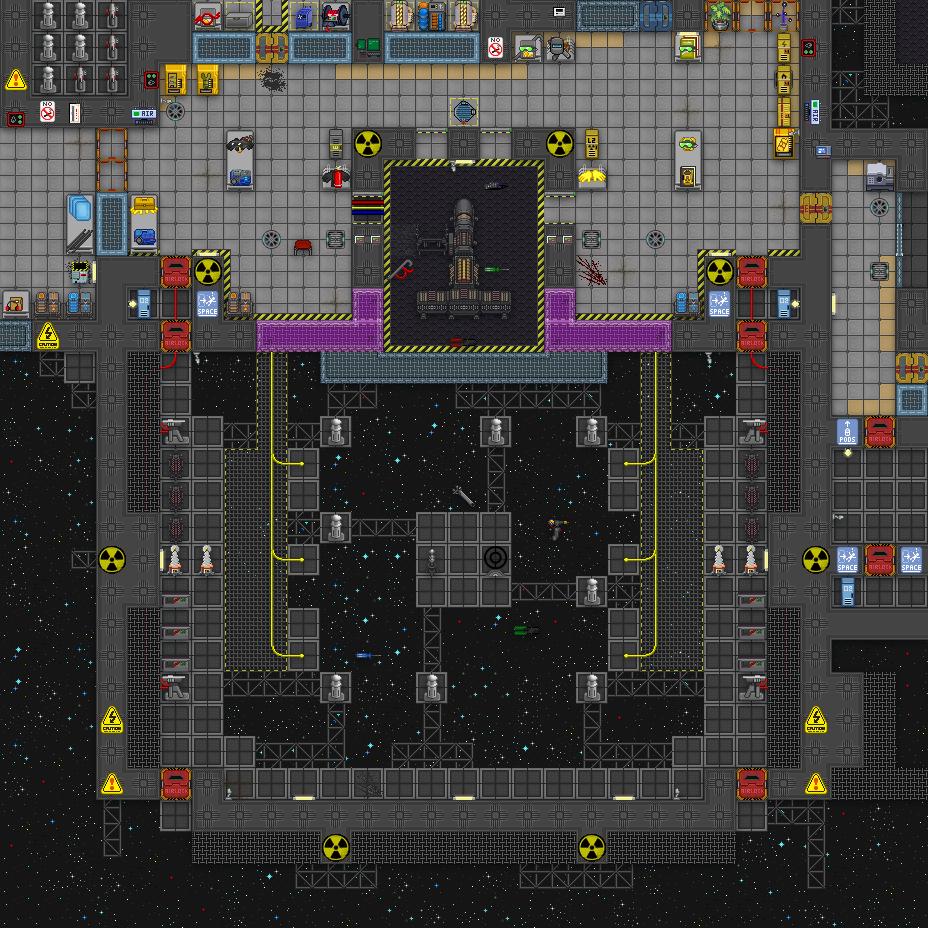 Greet your team over the radio and establish your authority. Find out who you will be working with and how many of them, and make sure that everyone has a job to do.

Designate someone to do solars (unless someone else volunteers first) and get everyone else working on the Singularity Engine, Tesla Engine, or the Supermatter. If you take charge these first minutes of the round, most of engineering will follow the rest of your orders until the round ends. If you stay silent until you suddenly need something done halfway through the round, you can guarantee that nobody will listen to you. If nothing else, speaking over the channel will at least tell you who on your team you can rely on.

Sometimes your team will be fairly competent and you'll only need to supervise, but a lot of the time you will be required to step in. If someone's clearly new, help them out a bit and show them the ropes. If someone's clearly being a twat then shout at them and forcibly demote if they continue. With these points in mind a power source should successfully come online and start generating power. It's always a good idea to announce this to the crew when it happens.

If any of your team members try to run off with an engineering hardsuit just to go space exploring, let them know that they will be arrested for dereliction and demoted if they do not return to do at least the most minimal duties before doing whatever they want.

With Your Powers Combined

There are multiple ways to power the station. Unless you know what you're doing, stick with the default one at first, and get it working as soon as possible. It's hard to set up a second power source if the crew is trying to lynch you for not finishing the first one.

Power Your Station With A Black Hole

The Singularity Engine is the most likely candidate for your default power source, unless the Nanotrasen architects have been messing around again. It should go without saying that, since the singularity is essentially a black hole, it should stay inside of its containment field and not grow too big. Also keep in mind that it pulses large amounts of radiation and EMPs, so always wear an engineering hardsuit or a radsuit when you're near it, and keep flashers and other sensitive electronics away from it (including cyborgs). Don't come near it in the atmospherics hardsuit, which had its radiation shielding stripped to make place for thermal shielding.

Make Tesla proud and run alternating current power the station with giant balls of electricity! Lately, the Tesla Engine has been sneaking its way into more and more Nanotrasen space stations. Operating it is somewhat similar to the singularity engine, but instead of radiation it will generate lightning bolts that must be captured with coils. Also, it won't deal any structural damage to the station if it escapes. Minus the exploding machines. And the blood and dust of former crewmembers all over the place. Keep it contained.

Whilst the singularity or tesla outputs a metric shit-ton of power, a hardened engineer like yourself knows that it's incredibly unreliable at the best of times. This is where the solars come in. Solars output a decent amount of energy and can keep the station running at bare minimum whilst you inevitably sort out an issue with the engine, but they need setting up first! Luckily this is even easier than setting up the singulo and you can just designate one of your minions to go out and complete the task, better yet if they volunteer. Remember though, engineering has only two hardsuits (radiation protection but no fire protection), and atmospherics only one (fire protection but no radiation protection). No yellowsuit chump's getting his hands on YOUR pristine white hardsuit (which protects against both radiation AND fire). So get the AI's attention and tell it that the man is allowed in EVA to pick up some equipment. Or just do solars yourself, you lazy fuck.

There is also a turbine installed. It burns through plasma to generate energy.

You can order a super matter shard through cargo and use it to pulse radiation to radiation collectors instead of a singularity. Super matter is extremely dangerous and you'll have to build an engine that's even more complicated than anything the station starts with (most likely from scratch), but that's no reason not to try it, right?

Atmosia, the Great City-State of Pipes

The singularity is running, the solars are wired and the engineering team are at your beck and call. The station is getting a steady supply of power and you're confident your team can maintain this and repair any damage to the hull. Your job is done, right? NOT SO FAST, my friend! Haven't you forgotten atmospherics?

Yes, as hard as it is to accept, that convoluted bundle of pipes and its clueless staff are under your jurisdiction and it's your responsibility to make sure that it's keeping everybody breathing. As the CE, you are expected to know the basics of how atmos works, how to optimize it, and then how to keep people from fucking with it. Luckily, that's pretty much it. Again, read the guide and learn it.

All you really have to do with atmos is get acquainted with its staff (you can do this at round start along with your direct minions, as they share the engineering channel), make sure they know how to optimise it (if not, do it yourself - better yet teach them), and then check back in periodically to ensure some asshole hasn't tampered with it, slightly more if the atmos team is the usual band of drooling lunatics.

Please keep in mind that making Atmospherics sabotage-proof (for example by removing the plasma tank from the loop) before you have decent IC evidence that someone is going to sabotage it is considered metagaming.

Now that the station's systems are running at maximum capacity or are in the process of being made so, you can relax a little. Here is what you should be doing:

As a Head of Staff, you are a prime target for the Revolutionaries, and will most likely be attacked in some way. While setting up the spare emitters, stealing the RCD and holing up in Engineering is a tempting possibility, it is in extremely bad form and will be met by negative karma and general hatred towards you. In short, do not barricade yourself in Engineering during a Revolutionary round. It makes rounds take way the hell too long, and may prompt non-revolutionary engineers to invade, especially if you start dicking around with the power supply.

You have easy access to anything of any real importance on the station, with the added bonus of being regarded only slightly more important than the RD (in that at least your own department listens to you, most of the time). You have the ability to completely ruin the station by fucking with telecoms, subverting the AI with the circuit board in tech storage, sabotaging atmospherics and the engine, and hide away safely in space with EVA gear. Remember that an extra-capacity oxygen tank filled to 1013kPa lasts a very, very, very long time. Have fun!