Difference between revisions of "Chemist"

You start in Medbay. You mess with all sorts of chemicals. That's it. Some of the time you can do what ever you feel like for most of the round or make stuff to deal with the security officers or syndicate fucking with shit in your lab. Be sure to keep the scientists stocked with acid, and keep your nose out of those space drugs!

Bare minimum requirements: Stock the dispenser up with some beneficial medicine before you go off on your own chemical adventures. Give Science sulphuric acid and botanists unstable mutagen when they ask for it 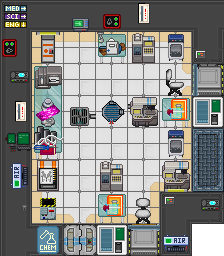 The chemical research lab is located in Medbay. It provides enough work space for two people

Chemists are naturally suspicious individuals. They've got all the tools in the world to break in wherever they desire and/or kill people in all sorts of horrifying and inhumane ways. An easy way to allay this suspicion - whether you plan on doing something suspicious or not - is to make yourself useful to the station at the game's beginning. Any accidents are likely to be blamed on your coworker, then, if you have one.

Tools of the trade

If someone comes and requests something from you, make sure you fulfill them first. No one likes a chemist doing his own thing as they have to stand there waiting. If you are in the middle of something, inform them that you will be right with them.

If You Want to be Especially Awesome

See the Guide to chemistry for a list of some of the possible mixtures.

As a chemist, you are pretty much the only person with access to grenade materials. You can fit two beakers worth of ANY COMBINATION of lab-juice you have created, a staggering 100 units, into any one grenade assembly. You can take out the containers by clicking on the grenade in your hand, but the containers are expended (obviously) when the grenade is used. It is possible to use medicine, water, or more devious items into a grenade. The mix and matching of different chemical formulas may not always go as planned, but what's science without experimentation?

Keep in mind, making grenades that harm others will get you robusted in the least, and possibly jobbanned if you are not an antagonist.

For reactions that go off when mixed, you want them separated into two bottles. For more on chemical reactions, see the Guide to chemistry. See also grenades.

Pills are a great way to give large amount of medicine at once, if you are going to make medicine that will be single serve, make it pill form. Each pill can hold 50 units of material at one time, and up to seven can be stored in a pill bottle! They are even small enough to store in your pockets. Patches are similar to pills, but work in a touch-based way rather than ingestion. Things like synthflesh and styptic powder only work in patches and will only damage the user if put into pills.

Chemicals to put into pills

Bottles should contain material that is not medicine, such as acids, or medicines that should not be used all at once, like cryoxadone. Each bottle can hold only 30 units, and can be splashed onto things. They can be produced infinitely from your ChemMaster, so feel free to go nuts.

Chemistry is one of the most dangerous jobs on the med-sci staff, and it's easy to be a good Traitor as such. A LOT of the chemicals you have access to will kill when injected. Access to grenades is a plus. If you can find a room with a light switch, you can inject the light bulbs with liquid plasma while they're off, then enjoy the show as someone flips the lights on.

If you're the paranoid type you could potentially acid your own face to screw up your identity, which now lists you as Unknown. The only problems are that Unknowns are naturally suspicious types and people are often quite suspicious of the chemist running around anywhere other than the chemlab. It will probably end up in a shitcurity interrogation.